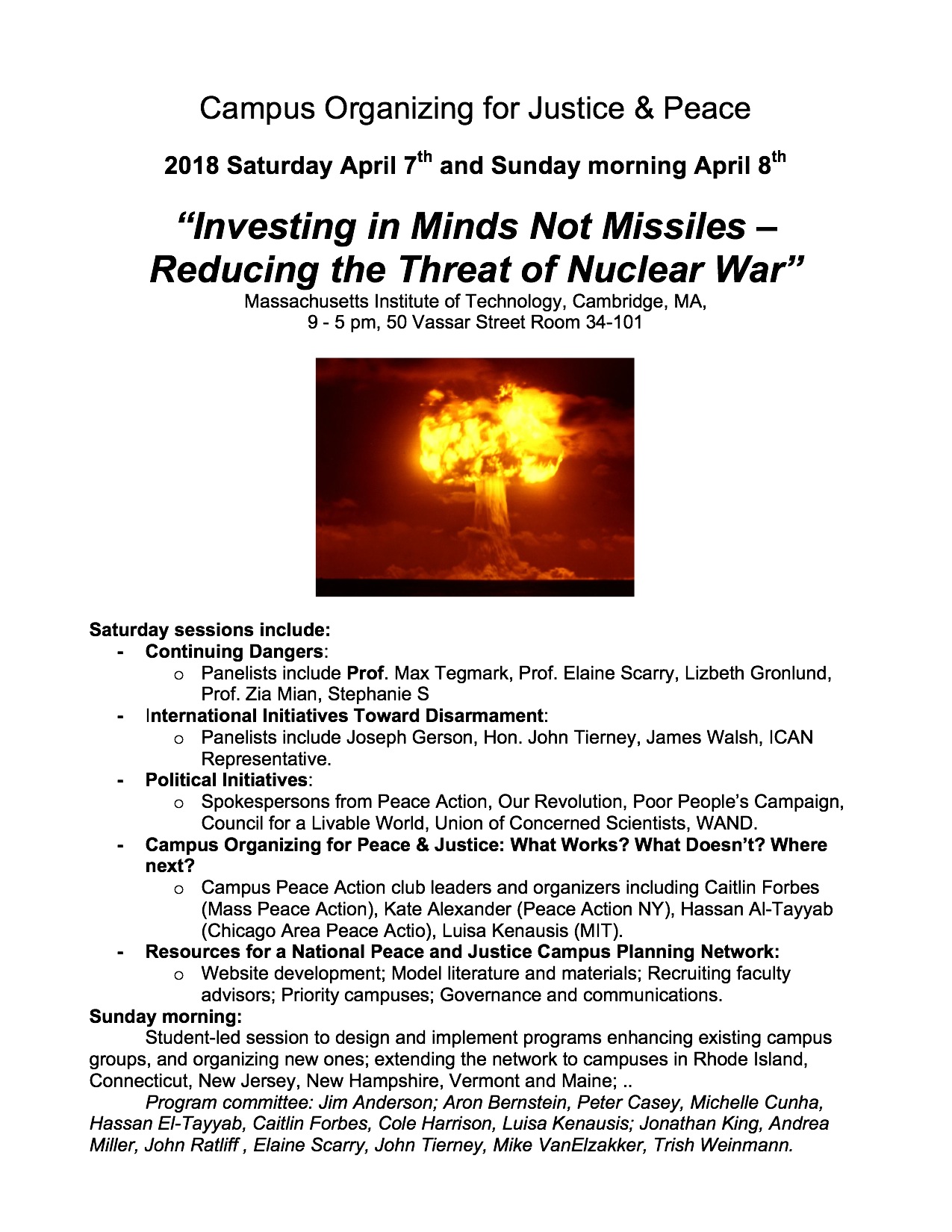 Nov 4th No First Use Conference 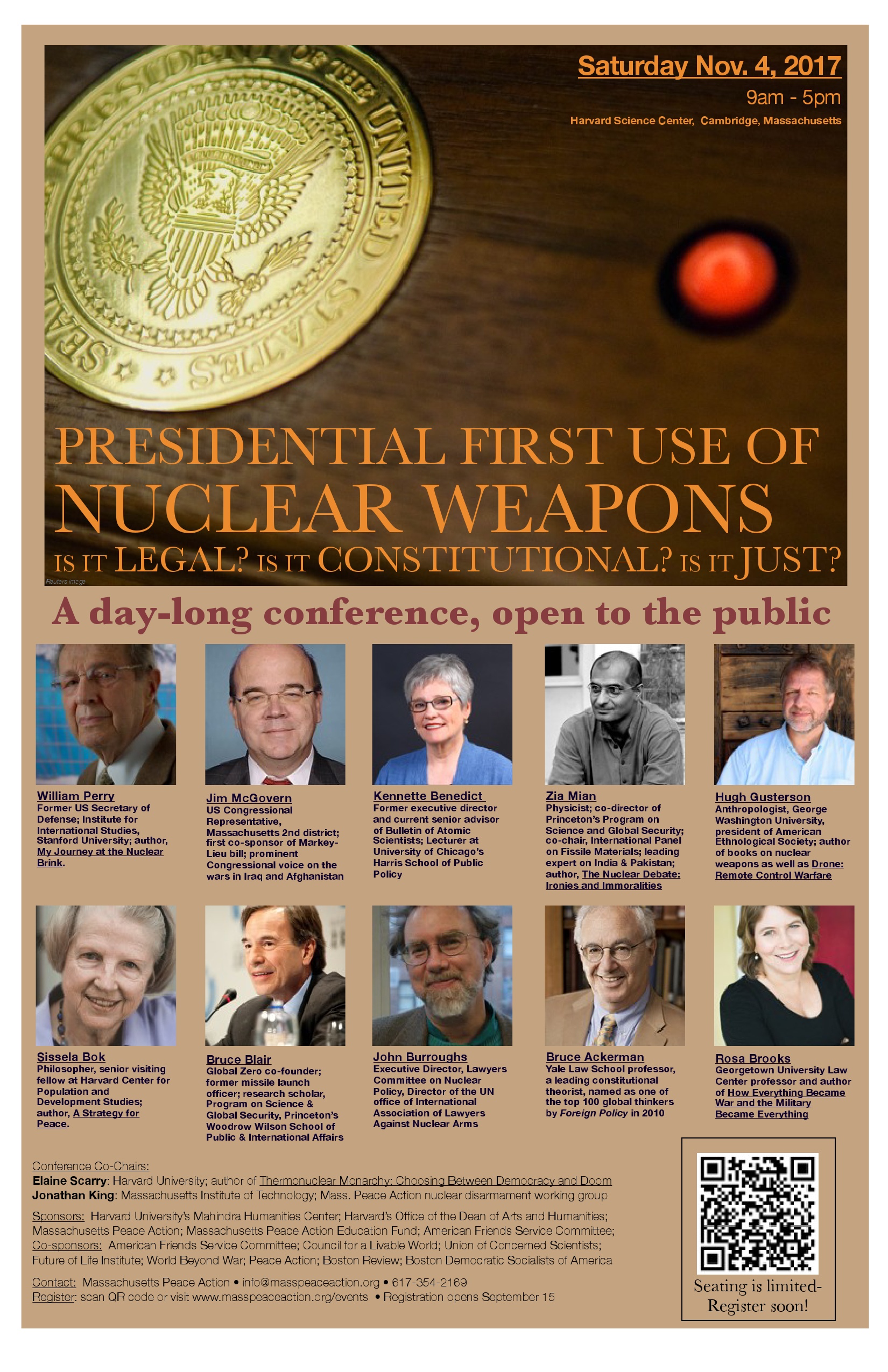 Today, 62 House representatives sent a letter to Secretary of State Rex Tillerson urging him to do what he can to rein in President Trump’s recklessness on North Korea. The effort was spearheaded by Rep. John Conyers (D-MI).

They also call on the administration to reaffirm Congress’ constitutional responsibility to debate and authorize war and seek authorization from Congress prior to any preemptive military action against North Korea.

Earlier this week, between the anniversaries of the atomic bombings of Hiroshima and Nagasaki, President Trump appeared to threaten North Korea with nuclear war, warning of “fire, fury and frankly power, the likes of which the world has never seen” should it continue acting aggressively. Today he doubled down on that statement, asserting that his statement perhaps “wasn’t tough enough.” This reckless posturing from the commander and chief underlines the importance of Congress taking a stand to ensure the president doesn’t stumble into a catastrophic war on the Korean Peninsula.

The full text of the letter and the signers are below. If you see your representative’s name, call and thank them for signing it and encourage them to continue speaking out on this issue. If your representative’s name isn’t there, call and ask them to speak out against Trump’s reckless statements, and in support of negotiations without preconditions with North Korea.

The Capitol switchboard number is 202-224-3121. Make sure to say your name and address so they know you’re a constituent, then ask them to support diplomacy and oppose preemptive war with North Korea.

Full text of the letter:

We write to express our profound concern over the statements made by President Trump that dramatically increased tensions with North Korea and raised the specter of nuclear war. These statements are irresponsible and dangerous, and also senselessly provide a boon to domestic North Korean propaganda which has long sought to portray the United States as a threat to their people.

Accordingly, we respectfully but firmly urge you to do everything in your power to ensure that President Trump and other Administration officials understand the importance of speaking and acting with the utmost caution and restraint on this delicate issue. Congress and the American public will hold President Trump responsible if a careless or ill-advised miscalculation results in conflict that endangers our servicemembers and regional allies. To allay these concerns, the Trump Administration should publicly declare its agreement with the constitutional requirement that any preemptive attack on North Korea must be debated and authorized by Congress.

As 64 Members of Congress wrote in May, “Military action against North Korea was considered by the Obama, Bush and Clinton Administrations, but all ultimately determined there was no military option that would not run the unacceptable risk of a counter-reaction from Pyongyang [that] could immediately threaten the lives of as many as a third of the South Korean population, put nearly 30,000 U.S. service members and over 100,000 other U.S. citizens residing in South Korea in grave danger, and also threaten other regional allies such as Japan.” Simply put, there is no military solution to this problem.

We strongly support your recent statements calling for direct talks with North Korea and offering assurances that our country is not their enemy and does not seek war or regime change. This accords with the approach that 64 Members of Congress urged in the letter to President Trump, and is also backed by leading experts on US-North Korea policy, including former Secretary of Defense William Perry, former Secretary of State George Schultz and former Senator Richard Lugar who have stated that our country “should make clear that the United States does not have hostile intentions toward North Korea.”

An approach that includes these elements has shown promise in the past. In 1994, after North Korea’s announced their intent to withdraw from the Nuclear Nonproliferation Treaty (NPT), the United States and North Korea engaged in direct diplomacy, resulting in the Agreed Framework. Under the pact, Pyongyang agreed to freeze its nuclear program, while U.S. committed to provide fuel for electricity to offset the power lost from shutting down their plutonium reactor. Despite allegations from both sides of non-compliance with the agreement, North Korea did not reopen their plutonium reactor, and in October 2000, the two countries pledged in writing that neither would have “hostile intent” towards the other. This progress was regrettably and unnecessarily halted after the Bush Administration took office, as then-Under Secretary of State for Arms Control and International Security John Bolton publicly admitted that he was “looking for [a hammer] to shatter the Agreed Framework.” We are grateful that you understand the urgent need to make a good faith effort to replicate these successes and we urge you to minimize preconditions in order to bring the North Koreans to the table and commence dialogue at the earliest possible date.

Finally, we respectfully request your assistance in receiving a response to our initial inquiry in our May letter. Kindly provide us information about the specific steps your Administration is taking to advance the prospects for direct negotiations that could lower the potential for catastrophic war and ultimately lead to the denuclearization of the peninsula. We also request any plans you may have to address important humanitarian issues of mutual concern such as the reunification of Korean and Korean-American families as well as the repatriation of the remains of US servicemen left in North Korea following the War, including whether these or other humanitarian efforts will be impeded by your newly announced travel ban.

We look forward to working with you to support crucial diplomatic initiatives and avoid catastrophic war.

At the United Nations in New York, a meeting convened by a December 2016 vote of the UN General Assembly has voted to make nuclear weapons illegal.

The decisive vote of 122 'yes' to 1 'no' vote took place this morning in the vast and packed Conference Room 1 just off the first sub-basement of the UN, after the Netherlands called for a vote. They were the sole 'NO' vote though Singapore abstained.

The vote was followed by prolonged cheers and clapping both from the many nongovernmental organisations present in the completely full Conference room 1 and in an overflow room, also completely full.

The President of the conference, Ambassador Elaine Whyte-Gomez of Costa Rica, could be seen with a number of other delegates, wiping away tears as the numbers flashed onto the electronic voting board.

As the vote was announced, she announced that there was a very long list of Governments that wished to speak about the decision. In fact as I write this release in the lunch-break that list has not been exhausted.

The vote followed three weeks of often agonizing negotiations, as well as two days of preliminary negotiations in March.

The Nuclear Prohibition Treaty arguably reinforces what is already implicit in both International Humanitarian Law and in article VI of the Nuclear Nonproliferation Treaty (NPT), namely that nuclear weapons are illegal.

While it could be argued that nuclear weapons are already illegal this treaty for the first time provides an explicit multilateral legal instrument that outlaws them.

In taking the floor, country after country noted the historic nature of what was being done. Other weapons of mass destruction such as biological weapons and chemical weapons, as well as landmines, are illegal. Yet until today, a specific instrument outlawing nuclear weapons has not been in existence. Now, there is one. Governments also noted the critical role of civil society in bringing about this result, as well as its existential necessity.

People for Nuclear Disarmament's nuclear weapons campaigner John Hallam, who has been present for the full three weeks of the negotiation as well as participating in some of the conferences leading up to it, noted that:

" Nuclear weapons remain the only weapon that can destroy both civilization and much of the biosphere in less than a couple of hours and can do so by mistake - a mistake that has nearly taken place on upwards of a dozen terrifying occasions already."

"To eliminate nuclear weapons completely is an survival imperative that civilization cannot evade. Its clear that the overwhelming majority of the worlds Governments understand that narrow considerations of so called 'national security' cannot override the imperative of the survival of civilization and of the human species, which nuclear weapons place in jeopardy. We call on all Governments without exception, including especially the Governments of the 'official' nuclear weapon states and other states that possess nuclear weapons, to do their moral duty to the rest of the planet and to join the treaty and eliminate their nuclear arsenals."

"Ultimately, if we completely fail to eliminate nuclear weapons, nuclear weapons will eliminate us. Nuclear abolition is not a 'feel-good some-century' ambition. It is an urgent survival imperative and needs to be prioritised as such. The majority of the worlds Governments have shown that they understand that very well. Now the states that have nuclear weapons must come on board"

"We call on all Governments without exception, no matter what kinds of military alliances they may be involved with, to join the Treaty and to make the necessary changes in their security policies."

Joint Press Statement from the Permanent Representatives to the United Nations of the United States, United Kingdom and France following the adoption of a treaty banning nuclear weapons*

France, the United Kingdom and the United States have not taken part in the negotiation of the treaty on the prohibition of nuclear weapons. We do not intend to sign, ratify or ever become party to it. Therefore, there will be no change in the legal obligations on our countries with respect to nuclear weapons. For example, we would not accept any claim that this treaty reflects or in any way contributes to the development of customary international law. Importantly, other states possessing nuclear weapons and almost all other states relying on nuclear deterrence have also not taken part in the negotiations.

This initiative clearly disregards the realities of the international security environment.  Accession to the ban treaty is incompatible with the policy of nuclear deterrence, which has been essential to keeping the peace in Europe and North Asia for over 70 years. A purported ban on nuclear weapons that does not address the security concerns that continue to make nuclear deterrence necessary cannot result in the elimination of a single nuclear weapon and will not enhance any country’s security, nor international peace and security. It will do the exact opposite by creating even more divisions at a time when the world needs to remain united in the face of

growing threats, including those from the DPRK’s ongoing proliferation efforts.  This

nor does it address other security challenges that make nuclear deterrence necessary. A ban treaty also risks undermining the existing international security architecture which contributes to the maintenance of international peace and security.