Students from campuses across the Northeast gathered at MIT this spring to share their experiences in challenging the US government’s aggressive foreign policy, growing nuclear arsenal, and neglect of pressing domestic needs. They were in town to lend their voices to the conference “Invest in Minds, Not Missiles: Reducing the Threat of Nuclear War” on April 7 and 8. This meeting, responding to the continuing risk of nuclear war or accident, continued the long tradition of advocacy for nuclear disarmament through the efforts of former MIT faculty including Vicki Weisskopf, Philip Morrison, Herman Feshbach, Randall Forsberg, Bernard Feld, Henry Kendall, Kosta Tsipis, George Rathjens and Aron Bernstein. Prof. Bernstein was a lead-off speaker. 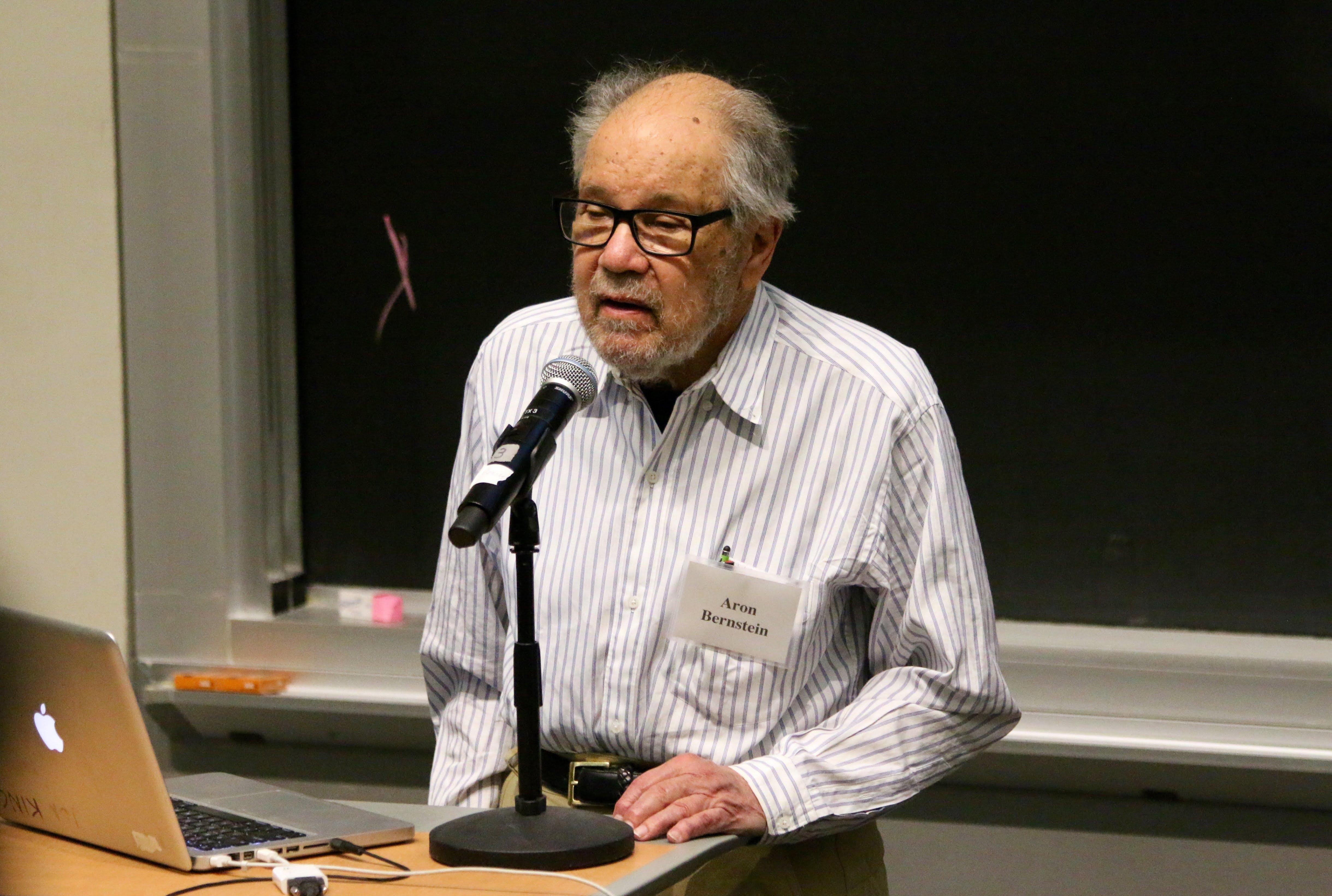 The students—who represented a spectrum of ages and academic levels, ranging from high school students and undergrads to recent alums, grad students, and postdocs—traveled to Cambridge from more than fifteen campuses in New England, New York and New Jersey to attend. Grants from the Ploughshares Fund and the Amy Rugel Foundation were vital in supporting the travel and lodging expenses of out-of-town students, as well as support from MIT’s Technology and Culture Radius program, the Institute for People's Engagement, and Mass. Peace Action.

The focus on campus organizing had emerged at the end of the 2017 MIT anti-nuclear conference, where participants realized the need to actively recruit young people and support their campus organizing efforts. Students have a leading role to play in the peace movement, which in recent times has been represented mostly by older activists and experts. Organizers of this year’s conference heeded the call. 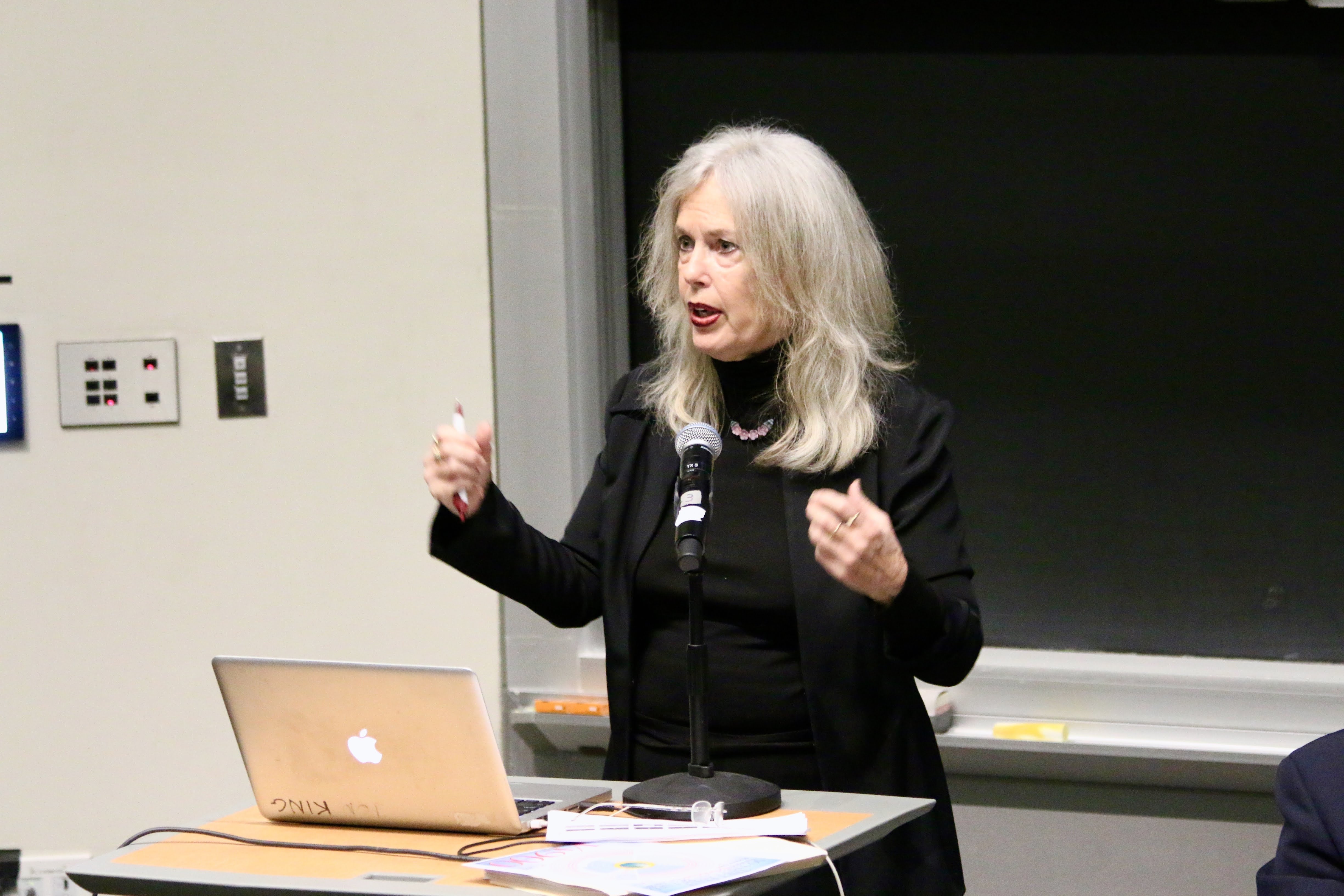 Cogent analyses of the economic pressures from the weapons industry were provided by William Hartung (Center for International Policy), Stephanie Scammel (Costs of War Project, Brown University), and Richard Krushnic (Institute for People’s Engagement). The proposed $1.2 trillion dollar nuclear weapon triad upgrades were concerned by all. Hartung described how these dollars are recycled through political donations to influence Congressional and Pentagon appropriations and policies. 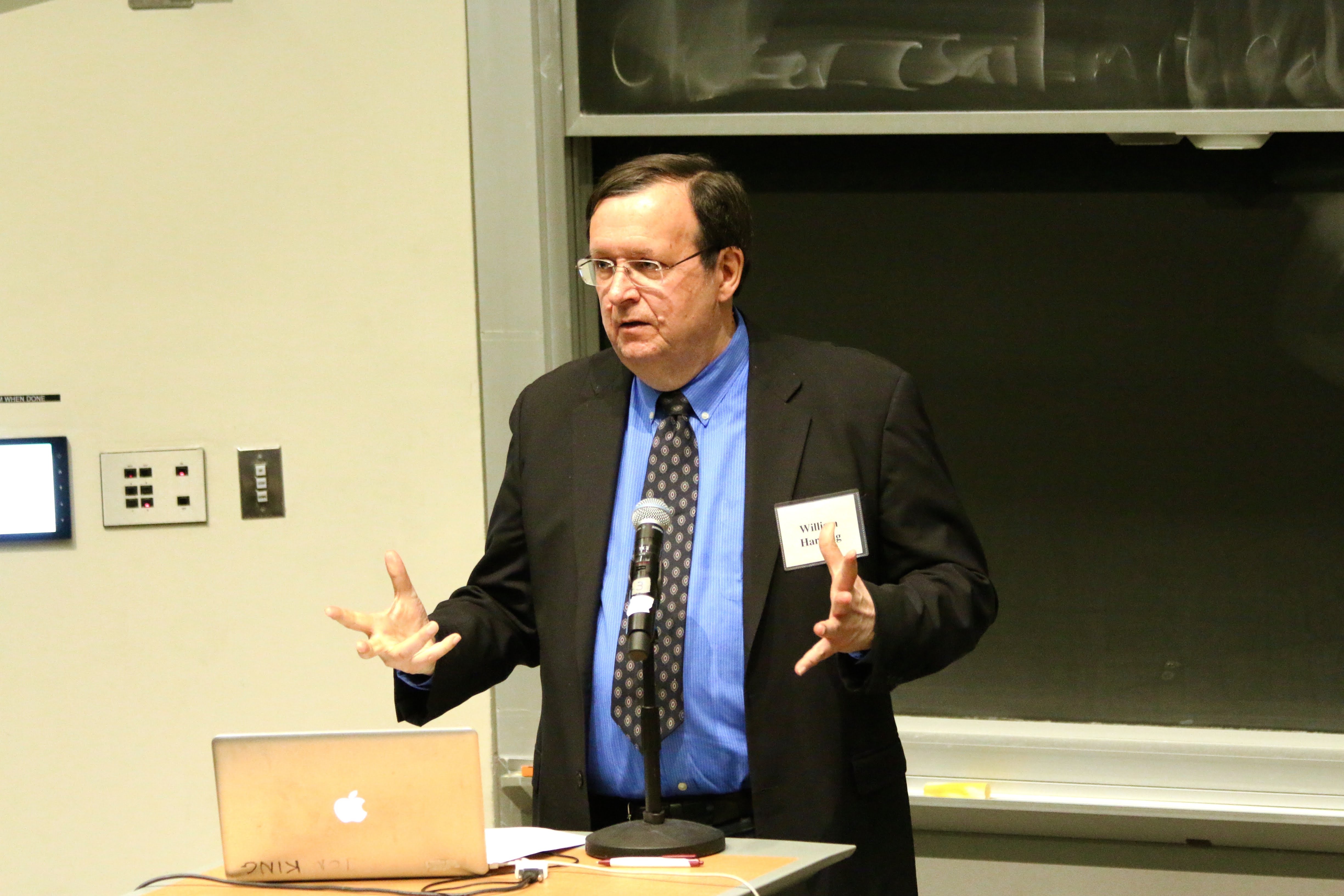 Medea Benjamin of Code Pink, Kristina Romines of WAND, Jonathan King of Peace Action, Paul Johnson of the Poor People’s Campaign, Andrea Miller of People Demanding Action, and Paul Shannon of the People’s Budget all described campaigns underway to broaden and expand the base of people concerned about the nuclear danger and the human burdens and economic cost of endless wars. Calling for pension funds, college endowments and other funds to divest from investing in companies that manufacture or maintain nuclear weapons educates the public that nuclear weapons are a domestic business as well as a component of foreign policy.

In the Campus Organizing panel Kate Alexander described the New York approach of contacting political active campus faculty members, and asking for suggestions for students to contact. Caitlin Forbes described MAPA’s approach of offering internships with MAPA, which included forming campus-based Peace Action clubs. Luisa Kenausis, a former MIT undergrad mentored by Prof. Aron Bernstein, described how she and other students contacted Physics Dept. faculty members, asking them to include in their lectures material on the bombing of Hiroshima and Nagasaki. Emma Budd and Eric Stolar of Fordham University described forming a “Humanitarian Student Union,” which organized events addressing pressing issues such as social justice and housing not covered in classes. 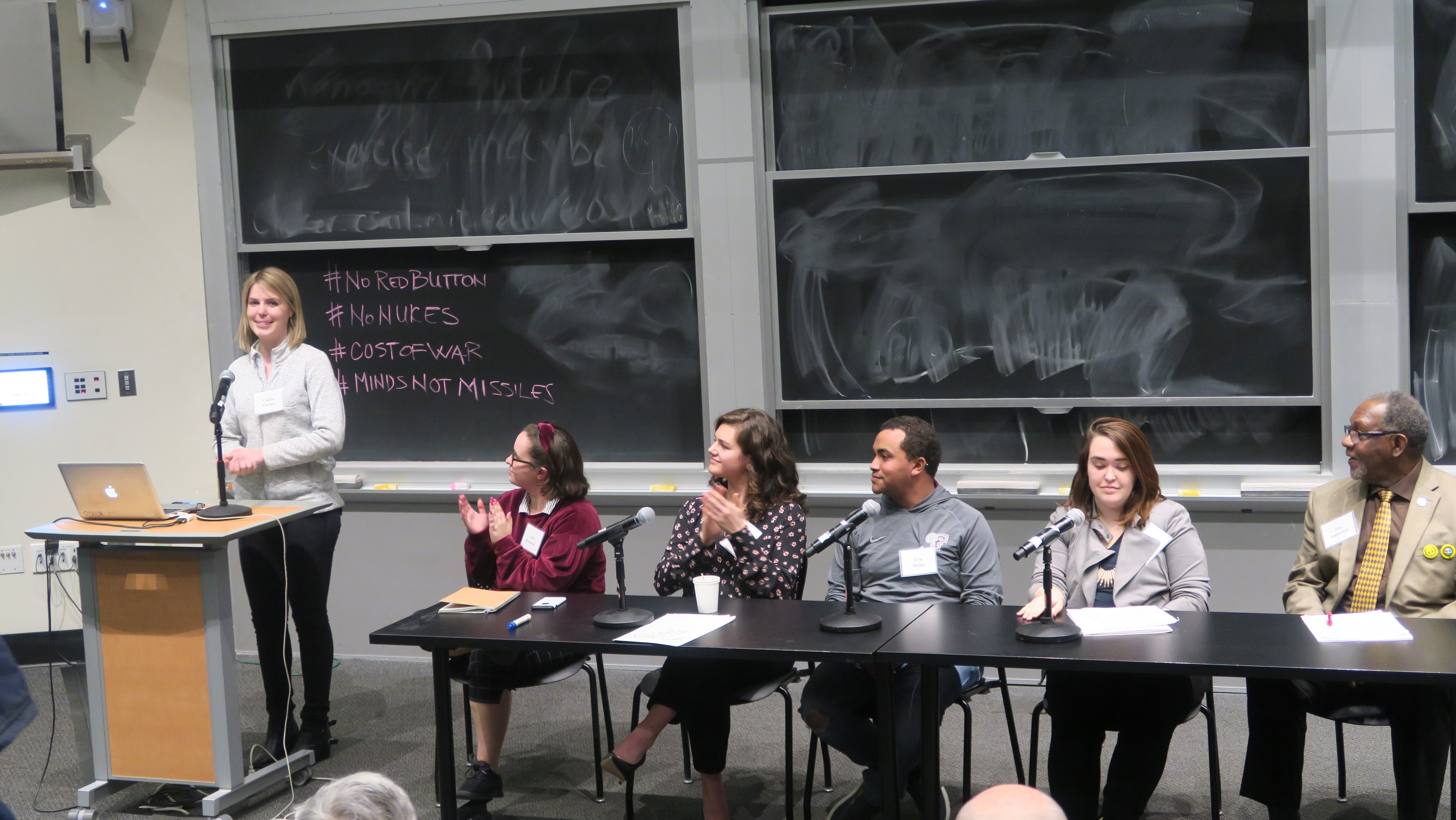 While the Saturday conference consisted of a daylong series of plenaries and workshops analyzing the current war danger, Sunday morning was devoted to a round-table discussion of campus organizing, in which students shared their varied experiences and tactics. Many described a low level of concern among their student peers about nuclear issues; however, they said addressing related issues such as the suffering of refugees, the militarization of police forces, and the defunding of human service programs, had allowed them to reach more students. Their programs included holding forums with guest speakers, showing films, and collecting signatures on petitions.

Luisa Kenausis, a former MIT undergrad mentored by Aron Bernstein, described how she and other students contacted Physics Dept. faculty members, asking them to include in their lectures material on the bombing of Hiroshima and Nagasaki, including the unimaginable human suffering. Now Luisa and Prof. Aron Bernstein, are developing a website with model curriculum modules, to distribute broadly.

Hainan Zhang of Rutgers described his participation in research under Prof. Alan Robock on “nuclear winter,” the inevitable result of a general nuclear war, or even a limited nuclear exchange such as one between India and Pakistan: the smoke and soot from the firestorms would be lofted into the stratosphere, would block out the sun for a decade or more, lowering temperatures to the level of the last Ice Age, and killing harvests around the globe, leading to near universal starvation. He promised to share his material with other campus groups.

Andrew King, from UMass Boston, described the importance of student peace activists joining in the Poor People’s Campaign. He said one of the six weeks of PPC non-violent civil disobedience, starting in Massachusetts the day after Mother’s Day, was devoted to protesting the war economy, which is draining resources from essential social programs. He noted this issue is especially relevant for peace and justice groups on many campuses.

Emma Budd and Eric Stolar of Fordham University addressed the issue of student groups obtaining resources from their universities. They described how their organization, “Humanitarian Student Union,” was able to hold educational talks and secure resources from an academic department interested in international affairs. Several groups mentioned receiving support and resources from their campus ministries. Sebastien Phillipe reported success at Princeton University in securing financial support from academic departments for a campus-wide day of action, which covered a range of issues including climate change, immigration, and restrictions on free speech. 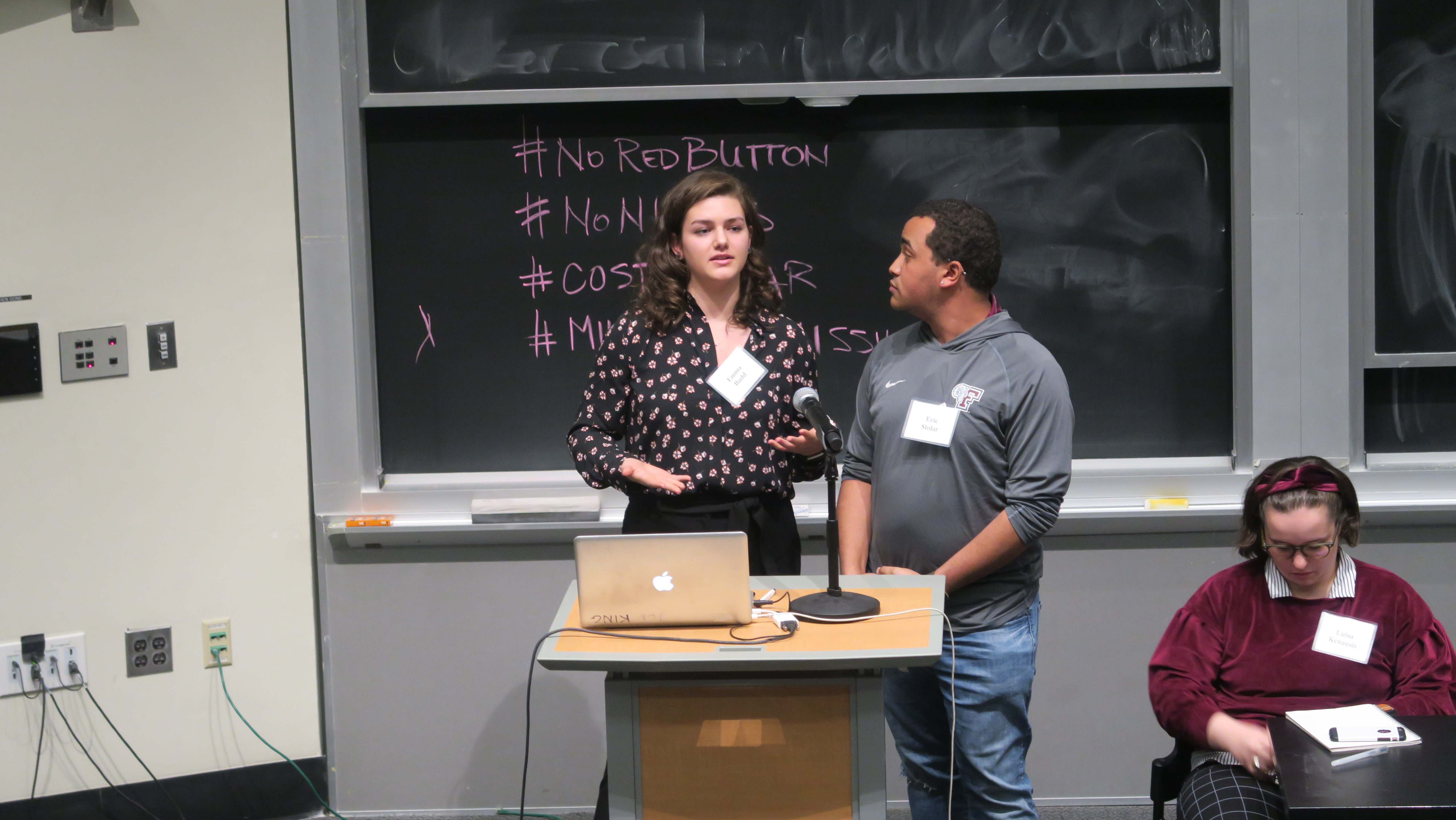 Participants agreed to form a Northeast Campus Peace and Justice Organizing Network to provide mutual assistance and support, and to help seed peace and justice clubs on other campuses. This work will build on the campus organizing efforts of Peace Action of New York State and of Massachusetts Peace Action. The next step may be organizing a similar forum in the New York / New Jersey area.

Special thanks to Cindy Woolley, Patricia Weinmann, Christina English, and Alexander Plowden for their logistical support.