No War in Ukraine

NO WAR WITH RUSSIA! NO EXPANSION OF NATO!

As the Ukraine crisis has intensified, a confrontation between the world’s two most heavily armed nuclear powers has become an actual possibility. The Biden administration has put 8500 troops on high alert for possible deployment in Eastern Europe, and threatened to deploy 50,000 more troops and send additional airplanes and warships to the area. With many thousands of Russian and Ukrainian troops near their mutual border, the situation is already tense.

Within the US, the bi-partisan Cold War hysteria has risen to dangerous heights. Biden has said that a Russian invasion of Ukraine is “imminent.” Congress is rushing through new legislation that proposes $500 million in new “security assistance” to Ukraine and is threatening to pass punishing new sanctions against Russia. The mainstream media, for the most part, has added to the turmoil by parroting false Cold War histories and narratives.

This dangerous rhetoric must stop! Instead of ratcheting up tensions, the US should work with all parties to de-escalate and pursue vigorous, sincere diplomatic paths out of the crisis. Ukraine’s leaders have advised calm and have rejected US statements that a Russian invasion is imminent.

The US has just managed to extract itself from a 20-year war in Afghanistan. Does our government seriously want to embark on another war? Since 2001, our long, bloody, fruitless interventions in Afghanistan, Iraq, Syria, and Pakistan have cost thousands of US lives, hundreds of thousands of civilian lives in those countries, and $6.4 trillion.

These US taxpayers’ dollars could have been used instead to address vital human needs, especially during the pandemic. We need serious investment in health care, housing, environmental protection, education, civilian manufacturing jobs, and programs that address the plight of the 140 million poor and low-income people in our country. The only entities that stand to benefit from warmongering are the huge weapons manufacturers of the military industrial complex.

For any kind of peaceful settlement to be successful, all parties will need to accept the legitimate security concerns of others. Yet the US refuses to foreclose the possibility of Ukraine membership in NATO. After the collapse of the Soviet Union in 1990, officials in the George H. W. Bush Administration, along with other Western leaders, repeatedly assured Russia that NATO would not move “one inch” further east after the reunification of Germany. Those promises have been repeatedly broken. NATO has moved ever eastward, adding 14 countries, including most of the members of the former Warsaw Pact, so that it now presses up against the border of Russia. Ukraine being part of NATO would put missiles within a few minutes’ striking distance of major Russian cities. Russia has long warned that this is incompatible with its security. One need only remember the Cuban Missile Crisis to understand Russia's attitude. The distance between Cuba and Washington D.C. is 1,250 kilometers. The distance between Ukraine’s border and Moscow is 490 kilometers.

We join with our colleagues in the “No to War / No to NATO” international network in calling for an end to further NATO expansion and the establishment of a new "Common Security" architecture in Europe, based on the principle that the security of one state is linked to the security of all others. Negotiations in regard to Ukraine need to be opened based on support for the 2015 Minsk II accord, which was signed by Russia, Ukraine, France, and Germany and was endorsed by the US and the UN – but has never been implemented. The Minsk II accord includes provisions for a ceasefire, secure access for humanitarian aid, withdrawal of all foreign troops and military equipment, and Ukrainian constitutional reforms that include decentralization of political authority, respect for and protection of Russian minorities, and relative autonomy for the regions of Donetsk and Lugansk.

Massachusetts Peace Action calls upon our members and allies to contact your US Representatives and Senators and strongly urge them to pursue peaceful diplomacy to resolve the Ukraine crisis:

No to the massive $500 million in “security assistance” for Ukraine!

No to the expansion of NATO!

Yes to negotiations and diplomacy based on the Minsk II agreement!

Turn down the heated rhetoric that could, by intent or accident, lead us into another war.

Without peaceful coexistence, there can be no peace.

2022 Reducing the Threat of Nuclear War:

With Congress appropriating funds for new and upgraded nuclear weapons and delivery systems, the need to counter these misguided policies has become acute. The 2022 Conference will follow the general pattern of previous conferences, but with increased emphasis on coordinating efforts of advocates, and expanding outreach to organizations and constituencies outside the world of nuclear disarmament advocates.

[2:05 pm] Background and Tasks of this Conference- Prof. Jonathan King

[4:10 pm ]- Breakouts, listed below in arbitrary order: These are focused working groups planning for 2022. Reporters to provide summary of proposals  from the Breakout for circulation to Registrants and co-sponsoring organizations.

- Prospects for Change in the US House - Representative Barbara Lee;

- Prospects for Change in the US Senate -Senator Jeff Merkley;

The  coronavirus outbreak and the nation’s lack of preparedness require a major change in national policy, shifting  investment of our tax dollars into public health, and away from prosecuting endless wars abroad. The large Emergency Stimulus Package Congress voted March 27 to cope with the crisis was a step in the right direction in cushioning the economic blows of the coronavirus outbreak. The direct response to containing the outbreak certainly requires expanding existing healthcare facilities and building new ones; increasing healthcare staffing; ensuring health care providers have an abundant supply of masks, gloves, and gowns to safeguard their health; raising the wages of frontline healthcare workers; and  ramping up testing at no cost to those tested. Whether the Congressional appropriation will be adequate  is unclear

For example, virus test improvement, vaccine and therapy developments are not funded by Medicare, Medicaid, other health insurance or hospitals. They depend on the efforts funded through the budgets of the National Institutes of Health (NIH), National Science Foundation (NSF), Biological Advanced Research and Development Agency (BARDA) and related basic and biomedical science agencies.  The $1 billion directed to the NIH, $4.5 billion to the Centers for Disease Control and $27 billion  to BARDA appear as generous sums given the previous almost austerity budgets for these agencies. But these investments pale when compared with this year’s  $738 billion currently being spent on foreign wars, 800 military bases around the world, and a dangerous new nuclear arms race. The  federal budget has been a business plan for the military/industrial complex, not a plan to protect the health and welfare of the citizenry. Now is the time to switch budget priorities.

Massachusetts Sen. Ed Markey and Peter L. Slavin, president of Massachusetts General Hospital, have called for a Manhattan Project level response to the coronavirus pandemic. We commend them for their leadership. We would make one change in that formulation: We need a Reverse Manhattan Project. During World War II, as the US engagement in fighting fascism in Europe and the Pacific deepened, hundreds of billions of dollars were diverted from civilian projects to concentrate on building the first atom bombs. Today, we need to divert hundreds of billions from our war budget, into the healthcare and biomedical research needs noted above, and even more into the economic cushions needed to protect our people.

Protect the Most Vulnerable

The  Poor Peoples Campaign, Move ON, Our Revolution, National Nurses United, and other organizations have emphasized the need  to protect all those at risk, but first and foremost are the 140,000,000 already below or near the poverty line. Among their calls are:

If ever there was a time when the desperate need for universal health care in this country became apparent, that time is now. We need for every person to be covered, including the most vulnerable among us – those who are elderly or homeless or incarcerated or low-income or suffering from chronic illnesses and underlying conditions. We are all in this together. We need hospitals that are properly staffed and equipped, not reeling from years of austerity. We need enough doctors and nurses to actually take care of the ill in our society. We need simplified regulations and a single payer system, so doctors do not become exhausted and cynical and unable to spend enough time with their patients because they are forced to spend endless hours filling out complex paperwork and arguing with insurance companies who care only about their profits. We need Medicare for All. Initial funding should come from cutting the bloated and dangerous military budget. Congressional adoption of Senator Markey’s Smarter Approach to Nuclear  Expenditure (SANE) Act would make available  $75 billon.

Among the most tragic and inhumane aspects of current US foreign policy are the sanctions which cripple the ability of vulnerable countries to save patients’ lives. These sanctions threaten all of us by contributing to the global spread of the coronavirus. Congress needs to act immediately to end sanctions against Iran, Venezuela, North Korea, and Cuba so that all countries can import the medicines, equipment, and food they need to prevent unnecessary loss of lives.

--Jonathan King and Rosemary Kean are Co-Chairs of Massachusetts Peace Action. Jonathan is professor of molecular biology at MIT. Rosemary is a retired RN, and Public Health Nurse 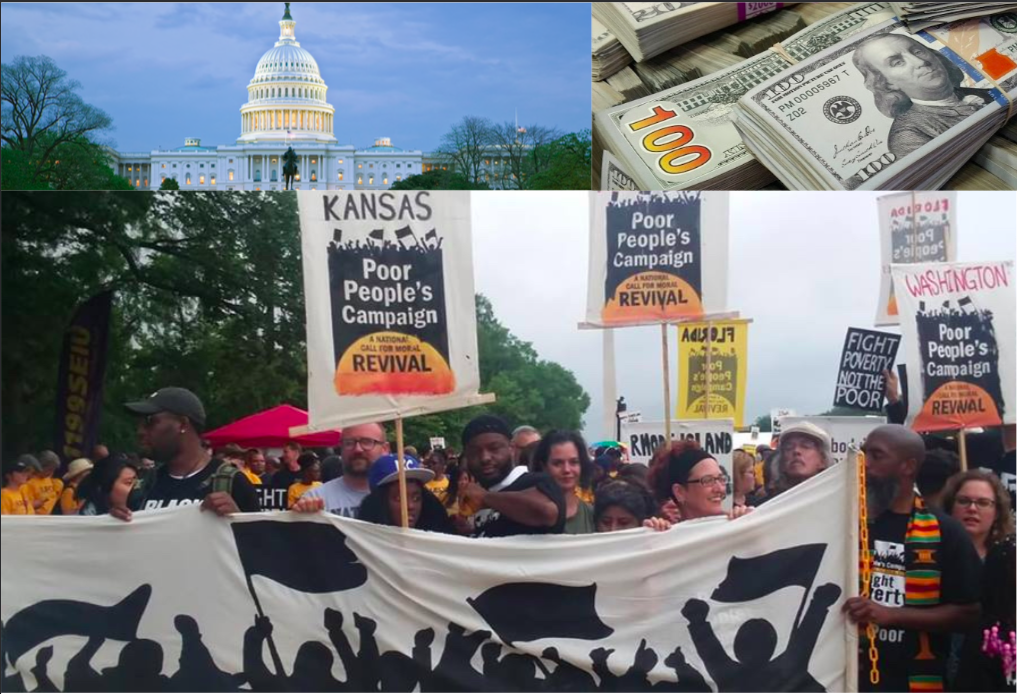 A Moral Budget for Massachusetts

Free and open to the Public but seating is limited. Please Pre-register to attend.

5:00: Report back from Workshops

Co-sponsored  by MIT Radius (of the Technology and Culture Forum), Massachusetts Peace Action, the MIT-Saudi Arabia Divest Coalition, MIT Students Against War, AFSC, the Institute for People’s Engagement, the Poor People’s Campaign, and the Campaign for Peace, Disarmament and Common Security.